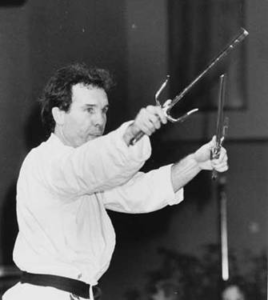 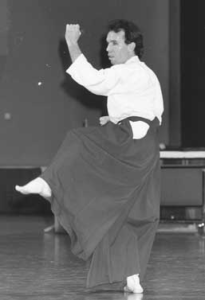 Sensei Mark Reddish commenced his training at the Sale Karate School, Victoria, in 1975 under Sensei George Trench. Sensei George trained in England under Master Keinosuke Enoeda, who himself trained under the great Karate Master, Funakoshi Gichin (1869-1957), the founder of modern Karate and creator of the Shotokan Style.

When Sensei George moved to Melbourne, Mark continued training under his father, who became the new Sensei of the Sale Karate School. This school was renamed Bugeido Shotokan Karate-Do in 1977.

During the late 70’s and early 80’s Sensei trained in a number of Karate styles including Heiwa-No-Tae(Shotokan) and Shin-Bu-Kai(Goju) and eventually achieving his Shodan in 1980, before joining the regular Australian Army.

After serving the Army, Sensei Mark moved to Tasmania in late 1985. There he started a number of Dojos, including Launceston, Longford and Devonport.

Sensei, married in 1991 after moving to Hobart, and continued to establish new dojos around the Hobart area, including the current dojos at Mornington, Lauderdale, Sorell and Brighton.

After Shihan retired, Sensei became the new Chief Instructor of Bugeido Australiaand its affiliates in Victoria and Japan. Sensei holds Dan rankings in Heiwa-No-Tae(Shotokan) and Bugeido Shotokan Karate(5th Dan).  He is also a qualified Shimpan(referee) and examiner.